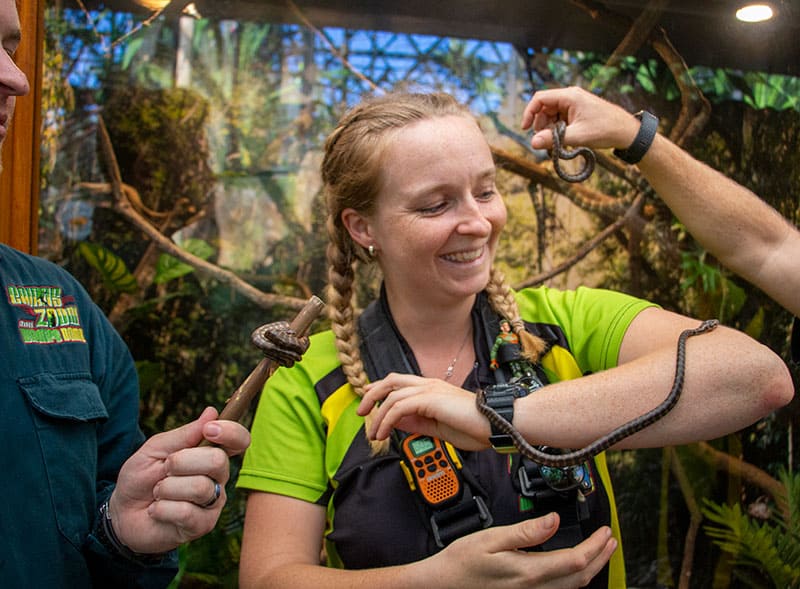 Warning: the cuteness of our new baby Pythons is actually off the scale.

These little guys may be cold-blooded, but they have already warmed the hearts of our keepers and the lucky guests that have spotted them.

So we will stop with the cringey dad-style puns and instead leave you with this in your head: ♬”Baby snake, do do do do do doo” ♪

Read on to find out more about our baby Pythons.

About Our Baby Pythons

The twelve baby Pythons were born to proud parents Grugg, a Darwin Carpet Python, and Jungle, a Jungle Python.

Incredibly, this means that these little guys (and gals) are actually a hybrid Python breed!

Jungle Pythons only occur in a small area between the Atherton Tablelands and the Cape York Peninsula. On the other hand, Darwin Carpet Pythons can be found in Northern Western Australia, Northern Territory and Queensland.

The result? Some quite rare hybrid snakes that you would be very unlikely to find in the wild!

Grugg and Jungle first laid their beady eyes on each other when our keepers re-arranged our snakes whilst constructing the new Python Pathway. These two serpents got very, ahem, slithery and the rest is history.

Grugg first laid her 13 eggs on the 12th of October. She then wrapped herself around the eggs and incubated them for a whopping 8 weeks.

Some may be surprised to know that pythons are quite maternal towards eggs and keep them warm with small muscle constrictions.

Below: Watch Ben the snake supremo (don’t tell him I called him that) introduce our baby snakes on a live episode of ZOOM in on Wildlife.

A Snake by Any Other Name Would Slither As Sweet

If you’re a Harry Potter Fan, the names of our snakes would put Gryffindor in your Sorting Hat!

Many of our snakes are named after famous Slytherins, such as Slytherin (duh), Draco, Snake, Leviathan, Basilisk, Nagini and Malfoy.

The first snake to hatch was Grungle, whose name is a rather funky hybrid of Grugg and Jungle, the parents’ names. Another snake is called Jugs, which is also a hybrid name.

Other snakes have pretty funny names, including Nope Rope and Danger Noodles. Pokemon fans will also recognise the name Ekans.

Jack, Queen of the Snakes, tells 7 News all about our Baby Pythons in this 7 News segment:


You can see a range of snakes on our brand new Python Pathway! It features enclosures that mimic the snakes’ natural environments, including backyard cane fields, rainforest and dry creek beds. One enclosure even features a mini Queensland house with its very own clothesline!